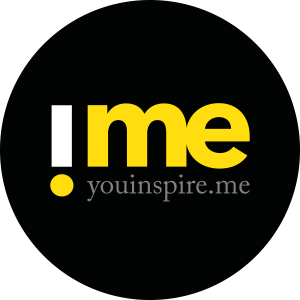 Two intimidating wild boar sculptures welcome us on a foggy morning of spring. After a short journey through a wooded landscape, we have arrived at Schloß Laudon, a stately home surrounded by water located in the environs of Vienna.

Just in this spot, where Baron Ernst Gideon von Laudon, an Austrian generalissimo (the highest ranking of all generals) who lived his last years until his death in 1790, is where we meet with the visual artist Alexandra Carter (Boston, USA. 1985).

Flanked by some books of authors like Unica Zürn, Leonora Carrington, and Alexandra Baumgartner, this creator’s work is characterized by a scrutinizing of the mind in the act of succumbing to an emotional frenzy.

“I am interested in the push-pull relationship between the effort to control or contain versus the need for catharsis or purge” points out the American painter, who accomplished in this place an artistic residency sponsored by the Austrian Federal Chancellery.

With solo exhibitions in the USA, Argentina, and Italy, her proposal is chiefly identified by compositions with a stained effect intensified by the pooling of liquids that include concentrate juice—memorizing the scenery of her upbringing on a cranberry farm—on nonporous surfaces.

In turn, the fluid line is juxtaposed within the same composition, from makeshift prints made of other transfer methods such as acrylic.

“My imagery has been suspended throughout various spaces making use of its translucency and presenting it as double-sided paintings that immerse the viewer in their own world” adds Carter. “I visualize the body coming out of itself exposing not only one’s guts but the emotional condition, in a way that can seem both pleasurable and painful.”

Following a stroll through the gardens, we bid farewell to the artist, leaving behind this captivating palace where legend says that the tomb of Baron von Laudon is empty after being reburied in an unknown place. 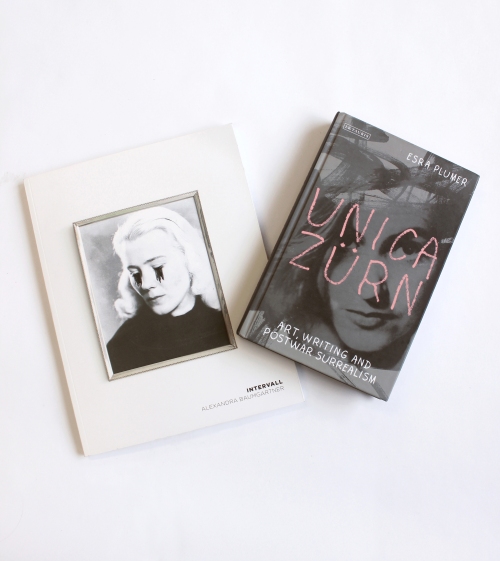 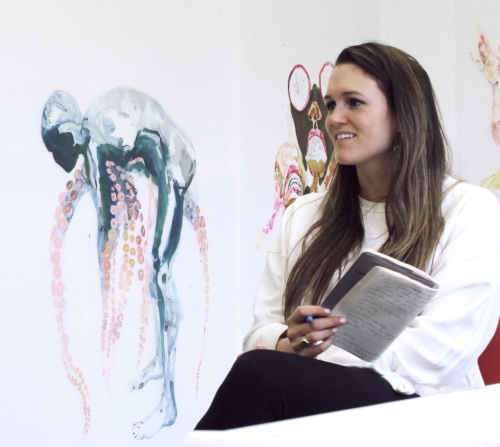 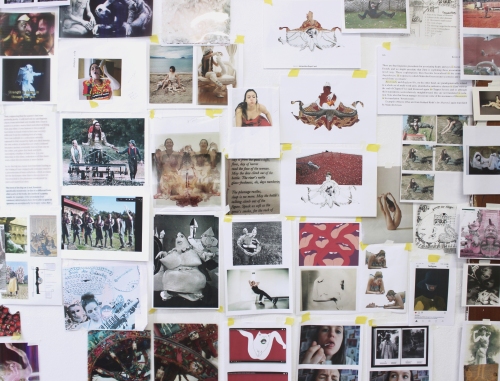 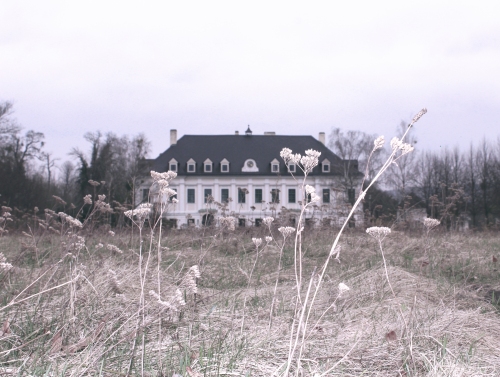 ALEXANDRA CARTER AT A GLANCE

Female artist. Louise Bourgeois (1911-2010). She was such a tremendous force in the art world, concerning women creating work (sculpture, installation, painting, and printmaking) in a very powerful way.

Book. The Man of Jasmine & Other Texts by Unica Zürn. Wherever I go, I bring it with me. It is a surrealistic narrative that kind of goes in a novel amidst reality and fantasy.

Album. White Men Are Black Men Too by the Scottish group Young Fathers. I saw them playing in London, and it was the best performance I have ever seen in my life. It over tracked me completely.

What inspires you? I feel that a good example of the word inspiration could be India. Being exposed to such a different culture with an overwhelming visual environment, and seen people´s dedication to their spirituality, was just inspiring to me.